Be responsible. Drink with moderation

Do you have the legal drinking age in your country?

Alentejo is the largest Portuguese province. It occupies a third of the national territory, being limited to the north by the Tagus River, to the west by the Atlantic Ocean, to the east by the Spanish border and to the south by the Algarve region. It is also important to highlight that:

• It is subdivided into 4 regions: Alto Alentejo, Alentejo Central, Baixo Alentejo, and Alentejo Litoral.
• It includes 46 councils, spread over the districts of Portalegre, Évora, Beja, and Setúbal.

It is the main agricultural region in Portugal, representing almost half of the surface used for this purpose.

What are the main cultures?

The main crops in quantity are cereals, olive trees, and vines. There are other relevant cultures, such as the ones related to fruits and vegetables.

It is in Alentejo where 30% of the total olive oil production in Portugal exists.

Regarding forestry, oak groves and groves of holms-oaks are the trees that stand out the most. They represent around 70% of the total national production, which greatly contributes to the fact that Portugal is currently the largest cork worldwide producer.

The cork oak forest also plays an important role in terms of biodiversity conservation and air cleaning. After all, for every ton of cork produced, cork oaks manage to clean 73 tons of carbon dioxide.

It is also in Alentejo where cattle breeding is quite present (mainly pigs, goats, and sheep).

Finally, the vineyard. This region has a great aptitude to produce quality and typical wines. Thus, and regarding the national market of bottled quality wine, with Controlled Denomination of Origin or Regional Wine, Alentejo represents 42% of the market share.

Alentejo has a great aptitude to produce quality wines. The hot sun in the summer, the dry and cold weather in the winter, and the particularity of the soils create the perfect environment to make them.

Over the last few years, Alentejo viticulture has developed thanks to the dynamism of Adegas Cooperativas.

In geographical terms, Alentejo Central is the most important area to cultivate vines, including the wine-growing sub-regions of Borba, Redondo, Reguengos, Évora and part of Granja/Amareleja. The first one covers not only Borba’s municipality, but also Estremoz, Vila Viçosa, Elvas, Alandroal, and Monforte.

The microclimate in some of these locations results from orographic accidents, influenced by:

At the hydrographic level, the influence of Guadiana, Sado, and its tributaries stands out.

On the other hand, we must not forget the important role played by Caia, Xévora, and Degebe rivers, tributaries of Guadiana, Xarrana, and Almansor.

The wine-growing areas of Alentejo are located in the Ibero-Mediterranean range, with Mediterranean characteristics. This means that springs and summers are particularly hot and dry, while winters are extremely cold. The average annual temperature is between 15.5°C and 16°C, with an absolute maximum of 42°C and a minimum of -5°C.

The insolation level is particularly high (3,000 hours/year), mainly in the quarter before the harvest, which contributes to the perfect maturation of the grapes and high quality of the wines.

These conditions are favorable not only to the synthesis and accumulation of sugars but also to the concentration of coloring matters in the berry skins.

In Borba, the average annual rainfall is 750-850 m, mainly during the winter.

In the wine-growing areas, the predominant soils in Alentejo have a granitic origin with patches of schist derivatives and quartz diorites.

Nevertheless, Borba is characterized by greater dominance of soils derived directly or indirectly from crystalline limestones.

In general, they have medium and low fertility but high natural drainage, which makes them particularly suitable for growing woody plants. 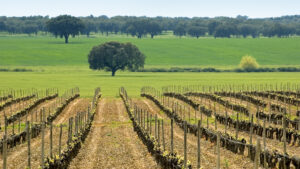 Vineyards in Alentejo are cultivated on the poorest soils of the region on slightly hilly terrains (except in Portalegre), predominantly facing South.

The vast majority of the vineyards in Alentejo is cultivated in an environment-friendly way. Winegrowers apply the method of integrated protection which reduces the use of pesticides significantly, using the least toxic products as little as possible.

The traditional training system is the low vine in trellis, with ascending vegetation, small and medium vegetative expansion, usually pruned in “bilateral string” or “double guy”.

The average production in the region varies between 35 and 40 hl/ha, whereas the maximum production, as defined in the statutes of the viticultural areas, is 55 hl/ha for red grape varieties, and 60 hl/ha for white grape varieties.